Defining project quality in project-based learning can be a tricky thing to do.  What outcomes are we trying to measure?  What determines the effectiveness of a project?  New Tech Network’s Project Quality Checklist utilizes Adria Steinberg’s 6 A’s to determine if a project is ready to roll-out or to assess its quality after implementation.  BIE’s Gold Standard PBL offers an outline for the essential elements of project-based learning, as well as, for project-based teaching.  While both tools are vastly effective, many times we forget to evaluate the context in which a project lives.  Below, I provide a very simple project context matrix to examine what type of authenticity is embedded in your project.  No project is wrong in itself, but it is important to understand the role context and authenticity play in a project-based world. 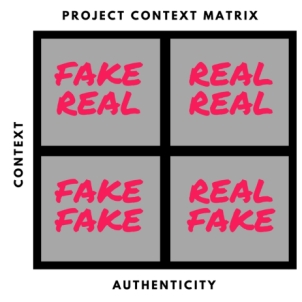 Is there really life on Mars?

Fake-Fake projects can sometimes be the most fun.  These projects generally live in the world of imagination and unfiltered possibilities.  Many times the context in which fake-fake projects live is outside the realm of reality.  As closely aligned, the authenticity provided is built upon creativity.  These projects can play a vital role in stretching the thinking capacity of students when it comes to moonshot ideas.  A great example of a fake-fake project I saw was examining ecosystems and our solar system.  Each group created a habitat for the life forms that were already living on a different planet.  Now we know that space travel and life outside of Earth is a whole different conversation, but the students knew that their ideas weren’t going to be implemented tomorrow.  However, the project was structured to stretch their belief of what was possible in relation to the world they knew.

Real-Fake projects take a very concrete principle and set of skills and apply it to made up scenario.

The United Nations preparing for the next zombie apocalypse.

In these projects, the context generally stretches our imagination and the authenticity is rooted in practical application.  A great example of a real-fake project was one I did my last year of teaching.  We used the book World War Z to guide us through a conducting a Model UN for the zombie apocalypse.  Obviously, until the zombie outbreak occurs, the context was made up (no, the United Nations is not currently trying to solve a zombie crisis), but the principles studied were rooted in foreign policy and how the United Nations works.  Students examined real global issues through the lens of the book and were even coached digitally by staffers in New York City.

Fake-Real projects are generally rooted in a very real problem or issue.  But 9 out of 10 times, the students solutions are not realistically considered by the stakeholders involved.  Many fake-real projects will have a context rooted in working with actual community partners.  They might even go through the same process that varying entities go through to examine the issue at stake.  However, the culminating events in these projects are not always put into practice.  A great example of a fake-real project is a local one from here at New Technology High School in Napa, CA.  Students examined a local land dispute between a rock quarry and public park. Groups took on the perspective of varying stakeholders groups and presented their recommendations to representatives from the community, the quarry, the park, and the city.  The project was very real and the context was unfolding before their eyes.  Whether or not the stakeholders put the students ideas into practice is yet to be seen.

Real-real projects are at the apex of the project context matrix.  These projects live in a truly real context and hold an authenticity to be rivaled.  Real-real projects allow students to be a part of problem-finding, problem-solving, and solution design that is embedded in something that is actually happening.  These projects can be the hardest to plan and the hardest to find.  It wasn’t until I decided to try and rethink my approach to the traditional economics course that I understand how powerful a truly real-real project could be.  The Believe in Your Business project is an 18 week entrepreneurial economics experiment.  Students learned the traditional economic principles of opportunity cost, supply and demand, and fair trade, but they did it through the lens of creating their own business.  In working with a group of mentors, students used the lean start-up model to develop their ideas and then pitch them to investors.  Ultimately, a few businesses were selected each year to receive seed funding, small business supplies, and continued mentoring.  Multiple ventures are still up and running even years after the students “finished” the project and graduated.
The moral of the story is that all four types of projects have a place in a project-based learning environment.  As a facilitator, it is important that you are examining the ratio of your implementation (too many fake-fake projects can lead to lack of student buy-in; too many real-real projects can lead to burnout).  Wherever you stand, reflecting on the context and authenticity embedded in your projects can lend to a more fluid and consistent project-based approach to prepare students for living in a project-based world.